Skip to Content Skip to Navigation
€10 off* your full order VIE-23INK Voucher code has been copied to clipboard When you buy at least one ink or toner cartridge
When you spend €89 (excl. VAT) or more. Discount ends 05.02.2023. *Terms & Conditions apply.

Go back to the Post-it® shop 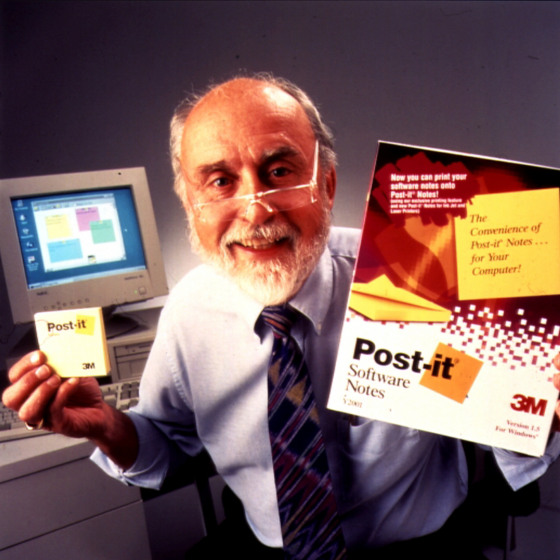 The history of Post-It® Brand

For generations office workers have used the humble Post-It® Note for all kinds of useful and creative purposes. Yet as universal as they’ve become, their beginnings were far from certain.

In the late 1960’s, Dr. Spencer Silver, a 3M scientist, was busily researching adhesives in the laboratory. In the process, he discovered something peculiar: an adhesive that stuck lightly to surfaces but didn’t bond tightly to them.

“It was part of my job as a researcher to develop new adhesives, and at that time we wanted to develop bigger, stronger, tougher adhesives,” said Silver. “This was none of those.” What Silver discovered was something called microspheres which retain their stickiness but with a ‘removability characteristic’, which enabled attached surfaces to peel apart easily.

For years, Silver struggled to find a use for his invention, but that didn’t keep him from plugging the merits of his creation to colleagues. “I came to be known as Mr. Persistent because I wouldn't give up.”

Meanwhile, Art Fry, another 3M scientist, was frustrated. Every Wednesday night while practicing with his church choir, he would use little scraps of paper to mark the hymns they were going to sing in the upcoming service. By Sunday, he’d find that they’d all fallen out of his hymn book.

He needed a bookmark that would stick to the paper without damaging the pages. Thinking back to a seminar he’d attended on Silver’s microspheres, he had what he now refers to as his eureka moment. “The one where you get the adrenaline rush.”

Partnering with Silver, they began developing a product. Once they found themselves writing messages on their new notes to communicate around the office, they realised the full potential of the idea.

“I thought, what we have here isn't just a bookmark,” said Fry. “It's a whole new way to communicate.” He decided to make 3M corporate headquarters his proving ground by supplying the entire company with the new adhesive notes. Employees loved them.

3M initially launched the product in four cities under the name ‘Press 'n Peel’, with mixed results. Marketers decided to put the product directly into consumers’ hands. The massive sampling effort — known as the ‘Boise Blitz’ because of its launch in Boise, Idaho — was a runaway success. Ninety percent of those who tried the product said they would buy it.

The notes spread “like a virus,” said Fry. “It was always a self-advertising product because customers would put the notes on documents they sent to others, arousing the recipient's curiosity. They would look at it, peel it off and play with it, and then go out and buy a pad for themselves.”

Silver said that like many ground-breaking innovations, theirs was a product nobody thought they needed until they did. On April 6, 1980, Silver and Fry’s unsung hero debuted in US stores as Post-it® Notes. The now iconic Canary Yellow™ colour was chosen by coincidence — the lab next door only had scrap yellow paper on hand. Soon after they were introduced in Canada and Europe.

Fry was honoured by 3M with the company's top technical title, Corporate Researcher. “My biggest reward is to see so many people use and appreciate my product,” he said. Soon the range expanded with Post-it® Index introduced as a new way to organise with colour coding, filing and indexing.

The Post-it® Note celebrated its 10th anniversary and was featured on many lists of top consumer products of the decade. Post-it® Meeting Charts were introduced.

After 28 years with the company, Spencer Silver, co-founder of Post-it® Notes, retired from 3M with more than 22 US patents to his name. Both Silver and Fry finished their careers at 3M having won the highest honors for research as well as numerous awards within international engineering.

By the late 1990’s  Post-it® Notes were sold in more than 100 countries, with a workplace study showing the average professional received 11 messages on Post-it® Notes each day. At this time Post-it® Super Sticky Notes

were introduced which featured a stronger adhesive that adheres better to vertical and non-smooth surfaces.

In 2005 Post-it® Notes celebrated its 25th anniversary. Throughout their history they have often appeared in popular culture, featuring in many TV series and films. This includes a season finale of Grey’s Anatomy where Meredith Grey and Derek Shepherd write their wedding vows on Post-it® Notes.

Today Post-it® Notes are available in more than 150 countries, with the range now including more than 4,000 products. Having seen Post-it® Notes featured in films, mosaic pop art and the daily lives of millions, Silver is blown away. “The fact that they’ve just exploded as a product is more than I could have ever hoped for.”

Click here for help with a wide range of topics such as your account, ordering and delivery. Or call: 0818 27 0151

Give us your feedback

Tell us how we are doing! We would like to hear your opinion.